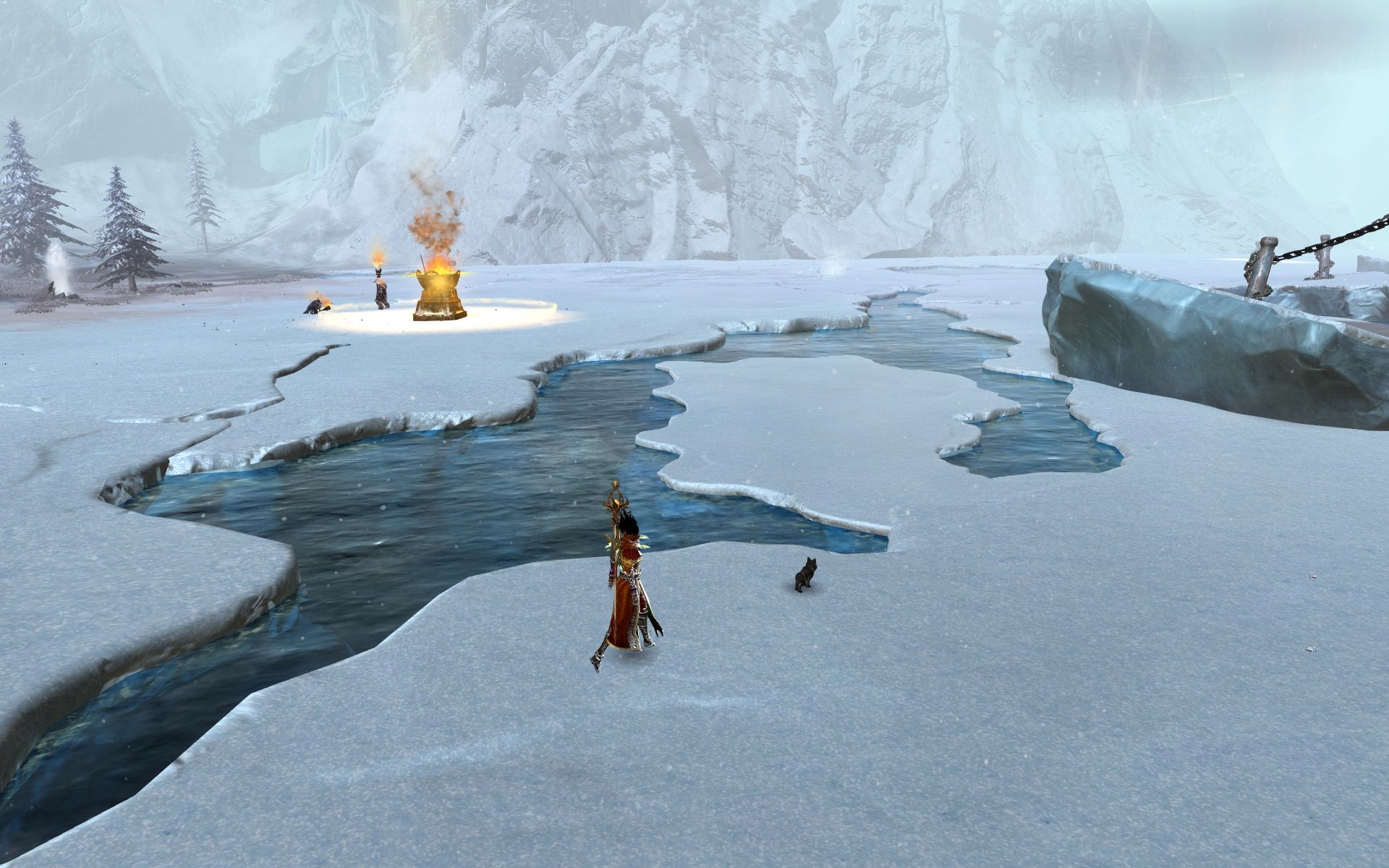 November saw the release of A Crack in the Ice, which continues the story of Season 3 of Guild Wars 2’s Living World. Lots of new content came in with this one and I was most excited by the addition of another brand new zone. Previously released were the completely new zones Bloodstone Fen and Ember Bay, which I covered earlier.

In the far north of Tyria beyond the familiar norn territory we encroach upon the Far Shiverpeaks, the territory of Jormag the ice dragon and its followers. Here in the Bitterfrost Frontier there are no norn aside from the Sons of Svanir, zealots in the service of Jormag and all quite beyond reason and redemption. The good guys that we do find on our side are the kodan and some remarkably hardy orca quaggan.

The kodan are of course the polar bear people familiar to most norn players and quaggan are based on whales, only small and dumpy. Now, “killer whale quaggan” isn’t really a canon name for these little black and white fellas but they’re the kind you find in the Far Shiverpeaks, far away from the grey-blue kind that you find in warmer climates such as the city of Lion’s Arch. These northern quaggan have been adopted by the kodan and have been taught the ways of Koda’s Flame.

Bitterfrost Frontier expands on the Ancient Magics mastery track that our characters learn at the start of Season 3. In this zone the kodan teach the use of Koda’s Flame, a gift from the kodan deity Koda to combat the freezing conditions and ice magic that we encounter. For the most part it involves the use of a two-handed torch that players can collect at a Brazier of Koda, guarded by a kodan keeper of the flame and his little quaggan apprentice.

These Koda’s Flame braziers are frequently contested by the minions of Jormag who will try to extinguish them. There is an event associated with both defending a lit brazier and also the process of re-lighting one should it be extinguished and be in need of recapture by the good guys. As long as torches can be taken from the brazier, players have a powerful source of fire magic that is easy to replenish. Should players venture away with a torch however, then the limited nature of a single torch comes into play.

Unleashing Your Own Inner Fire

One important tip for players is the use of the “Warmth” buff. Bitterfrost Frontier is frequented with Ice Storms, a new type of enemy that can’t be harmed with normal attacks but rather dies to the use of Koda’s Flame. Now, you can use a Koda’s Flame torch to kill these things. Standing by a brazier will also protect you. However, often you’ll be empty handed in the middle of nowhere and it’s only a matter of time before you end up trapped in an ice block, either by an Ice Storm or another enemy.

Whenever you break out of an ice block, you’ll give yourself a few seconds of the “Warmth” buff. Not only does this make you immune to being frozen again for a while, but you pulse damage to any Ice Storm you run inside. After three pulses the storm will be dead. The only tricky part is to stay inside the Ice Storm until it dies, and since they move quite erratically it might take a couple of goes. Often the Ice Storms are not especially threatening but they are quite dangerous with a lot of other enemies around.

Another thing that gets frozen a lot out here is treasure. There is a meta-cycle in the central part of the zone called “Beacons of Koda”, which involves defending the braziers, slaying Jormag’s minions, his champions, and finally looting a lot of treasure in frozen Icebound Chests. The “keys” for the chests is are the torches you can get at the braziers, which will briefly melt the ice encasing a chest for all players who want to loot it. For that reason a bunch of players might go around together with torches and loot Icebound Chests together.

The other much sought-after treasure out here are Winterberries, collectable from Winterberry Bushes and chests. Much like Petrified Wood in Ember Bay and Bloodstone Rubies in Bloodstone Fen, these items can be spent at a merchant in the kodan town of Sorrow’s Eclipse for ascended quality trinkets and other items. Alternatively they can be eaten for Unbound Magic or used in cooking recipes! Unbound Magic itself is also a currency here and can be found all over the place from underwater, to high up in giant trees or deep inside enemy infested caves.

Also familiar will be “repeatable hearts”, just like the ones in Ember Bay. These reset daily along with the inventory of the heart merchant that you do favours for. There are four heart quests in Bitterfrost Frontier, one of which oddly enough is a Svanir sorcerer. I’m still unsure how that guy ends up liking what we do for him, but he sells a couple of unique miniatures to us anyway. Another heart involves defending endangered snow griffons, another involves befriending a grawl tribe and the last involves a quaggan hot spring. I kid you not.

As usual you can find a full spoiler guide to all the activities right here on Dulfy. For the best experience I’d try to do as much as possible without the spoilers, obviously!

Something I really enjoyed myself about this zone was the explorable nature of it and all the little pickups and hidden chests everywhere. There is a frozen forest of giant trees that involve jumping mushrooms to reach platforms far above, and there are a few chests up there whose placement changes daily. There’s also Unbound Magic up there. You might also find a “norn cross” (essentially a Celtic cross) partially buried in the snow near a frozen waterfall. Activating these artifacts will reveal a hidden treasure and there is more than one waterfall to find.

There isn’t a true jumping puzzle in Bitterfrost Frontier but there is one particular vista in Dragon’s Teeth that involves some intrepid climbing. While you’re up there make use of the thermal vents and your glider and be sure to grab all the loot you can find. Whorl Lagoon in the centre of Dragon’s Teeth is also diveable to a considerable depth, plus you can hide there in case of rampaging icebrood or angry mushroom men…

All-in-all Bitterfrost Frontier felt like an easy zone for tanky characters to goof around in while glassier characters might struggle with the enemy tactics of chills, freezes and movement skills like leaps (Icebrood Wolves) and whirls (Icebrood Kodan). Together with Bloodstone Fen and Ember Bay it’s possible to collect a full set of ascended trinkets for all your characters without a horrific amount of effort, plus these ones have stat selectors that allow for the quad-stat combos introduced with Heart of Thorns and previously unavailable tri-stat combos from Living World Season 1.

As usual please share the guide if you like what I write and feel free to comment. Also as I recently changed the comment system over to Disqus, where I am known as Tilveran, I’ll have to think about which pen name to use. Would it get confusing?

Lastly if you’d like to support my guides, please consider a donation. Thanks for reading and I hope you have fun in this very pretty zone!