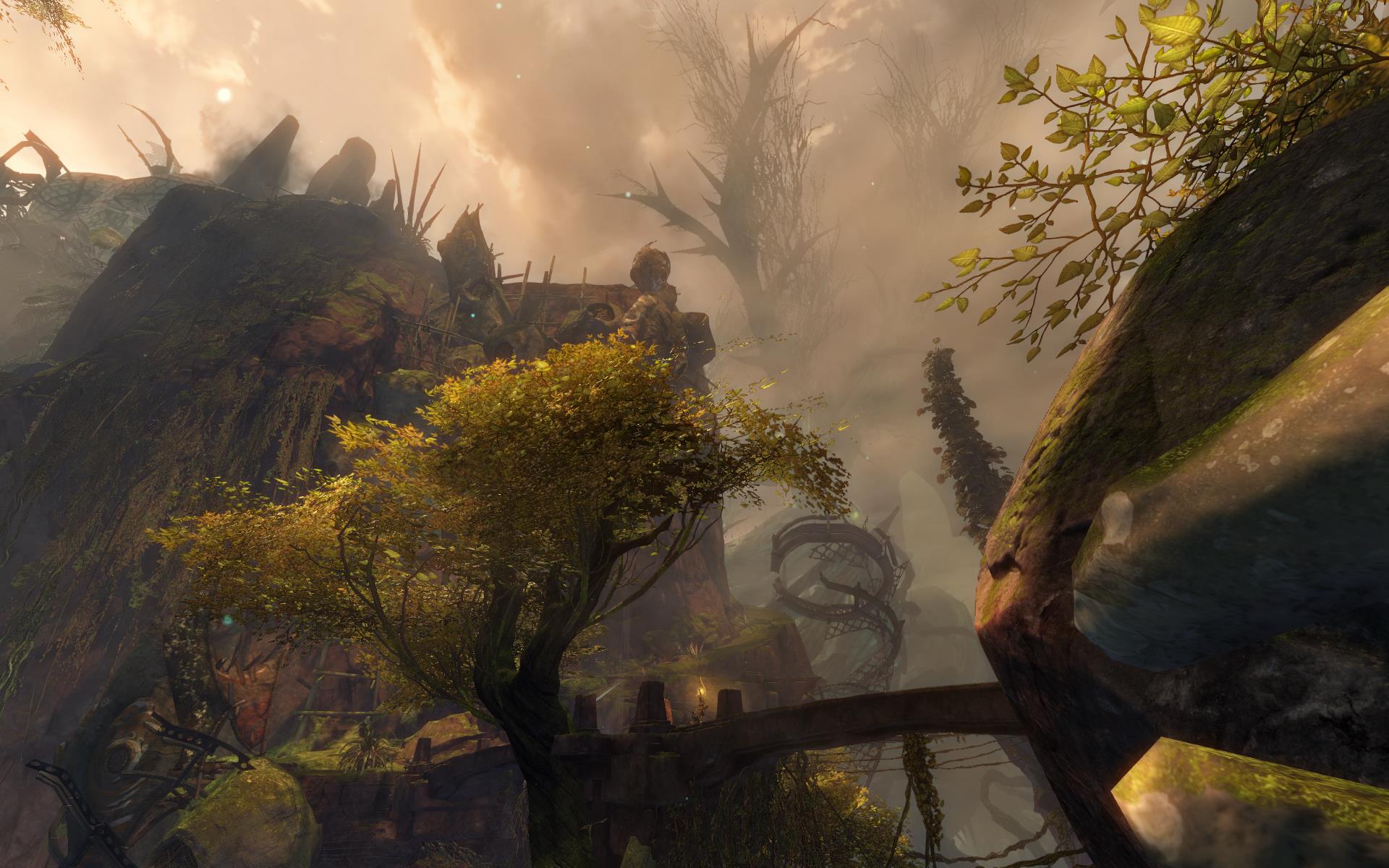 Welcome, adventurers! The 2016 Spring Update brought significant changes to the way Verdant Brink plays and I felt that the usual technical guides could do with a more conversational companion guide to advise players on what they could do in this zone given 20 minutes, 30 minutes or an hour of play time.

The zone is still on a 2 hour day/night cycle, which means that if you entered the zone at daybreak it would take a full 2 hours to get your final map reward at the following daybreak. Obviously a lot of players don’t have 2 straight hours to do this, so let’s go over what happens during the cycle, and then what you can do if you arrive at a random time with only a shorter session at hand.

You can find an overview to Verdant Brink on the official wiki here along with an event timer that tracks the current day/night cycle. There you will find maps and details on how each sector of the map progresses during the day, and then details on the night campaign and locations of the canopy bosses that appear in the last 20 minutes.

The wiki guide is a useful reference for finding things but it doesn’t tell you how to effectively use your time in the map, so let’s get started on that now.

From Dawn to Dusk

At dawn break, each sector of the map begins a chain of events that builds up that location. These five sectors are known as the Itzel (aka “frogs”), the Nobles (Lord Faren and friends), the Pact (starring Doc Elly, Chief Timblin and Master-at-Arms Neary), Pale Reavers (aka “sylvari”, lead by Laranthir of the Wild) and the Ordinance Corps (Beigarth and company).

If you just want to follow along with the local story then it’s as easy as joining in on the dynamic events that are going on. Even after the area is complete there will be additional bonus events such as hunting veteran mordrem to watch out for. Bonus events are especially worth watching out for as they’re an easy source of Pact Crowbars, which you use to open Airship Cargo treasure chests, which contain loot and (often enough) lots of the local Airship Parts map currency that you can spend at vendors for map rewards.

From Dusk until Dawn

At night, a 45 minute countdown will begin and various Pact “rally points” will be marked on the map. You can help out by defending these rally points, escort Pact soldiers carrying supplies, retake lost rally points, or hunt bonus mordrem veterans. Alternatively you can just goof off and look for treasure (Airship Cargo), hit the gathering nodes, and maybe help out at random events you trip over along the way like the Skritt Burglar or Treasure Mushroom.

At the 20:30 minute mark, the Night Bosses will be available and you can consider going to those.

If you plan on sticking around until the map rewards are handed out at the end of the timer, aim to get 100% or greater “map participation”. You can check your current level by hovering over the chest icon above the mini map. Any event you do at night will advance your participation and the fastest way to raise it is to do escorts, tag defence events and and slay veteran rampaging mordrem. You might also have opportunities to tag Hero Point events and odd things like the Skritt Burglar and Treasure Mushroom.

All of the player controlled rally points will all be attacked at the 44:30 mark, 34:30 mark and 24:30 mark on the timer for 4 minutes or until the mordrem win. If you intend to play these events, you must retain control of the “capture zone” by slaying the invading mordrem and making sure that they don’t outnumber you and your allies in the capture zone.

These guys carry enough supplies to add a full level to a rally point, immediately refreshing any barricades and turrets, possibly adding new features and allies to fight off mordrem. The best time to do these events is after mordrem attacks have ended, but if the rally point you are supporting has a lot of players defending it then you can probably get away with doing an escort during the invasions.

Most of the veteran mordrem are easy kills for easy map participation and rewards. If you see one nearby you should consider going over and blowing it up before continuing with whatever it was you were doing.

The five night bosses are the big highlight of Verdant Brink but you might only have time to do one of them at a time, so think about which boss fight you’d like to go to beforehand. Each boss corresponds with a zone from the day phase and you can take any of the Pact choppers in that zone to reach the same boss. These are, with notes for fighting them:

Any Nobles chopper for Axemaster Gwyllion.

Any Pact chopper for the Wyvern Matriarch.

Any Pale Reavers chopper for the Wyvern Patriarch.

Any Ordinance Corps chopper for the Tetrad.

Providing you kill any of these bosses you will get a big boss chest with some special daily rewards that you can only get once per day. If you stay until the timer reaches zero you will also get a reward based on your map participation, including a Bladed Armor Box if your map reached tier 4. You can use any spare time to mop up Airship Cargo, especially the floating cargo pods that you only need to touch to collect. Note that you still need a crowbar to do this.

If you want to maximise your rewards for time spent then hit a few events to get crowbars and then spend some time hunting down cargo chests to open. If you need Mastery Experience then be aware that you can do Hero Points (HP’s) once a day for loot and experience, so if you see someone calling out for help in map chat be aware of that opportunity. Also if you have some crowbars, keep an eye out for Large Airship Cargo chests that can be found just about anywhere.

If you just want to relax and explore during the day or night time then gathering can be both fun and lucrative, especially if you’ve stockpiled some crowbars as well.

Cashing In Your Currency

Once you’ve opened a whole load of Airship Cargo chests and claimed other event rewards, you’ll have a big stack of Airship Parts to spend at the zone merchants. There’s an Itzel Mastery vendor at the east entrance of the zone at all times, and there’s another one some of the time in the Itzel village.

If you have currencies from Auric Basin and Tangled Depths, there are also merchants who take those currencies as well. The Exalted Mastery vendor is by the Noble Ledges waypoint in the west and the Nuhoch Mastery vendor is in the Itzel village, but depending on the time of day they may or may not be there.

The main things to buy at the Itzel vendor is probably the Bladed Armor set. There’s a small number of achievement points (3) for collecting every piece and a bonus reward of 3 transmutation charges.

No guide would be complete without mentioning these.

Adventures are mostly available during the day. They give out rewards for each tier (gold, silver, bronze) once per day, making them a decent source of mastery experience if you find them fun. They also give out a little currency and an item.

Insights are Mastery Points that you have to reach and channel like the similar type of Hero Point challenge. You do them once and that’s it.

Strongboxes are similar to Insights, except they are not marked on the map. They can be looted once per day for a few items and don’t need a crowbar. There is an achievement associated with finding each one.

Hero Points are split into the channel types that you only have to get to and channel, and the combat ones that can be quite demanding.

Almost a footnote, the juvenile Fire Wyvern is found here. You can get there any time by following the directions given on the wiki.

So, that’s about all I can think of that’s worth mentioning concerning Verdant Brink. If there’s one other thing I’ll say is that this map is gigantic to the point I’ve been exploring it for months, especially since fully unlocking my masteries. It’s very easy to find things to do and the day time stories are really quite entertaining. There’s a great deal of replayability value here to keep you entertained for a long time, whether it’s getting some action at a boss fight, chilling out cruising the canyons for resources, popping a few airship cargoes, or whatever else you like doing.

If there’s any details you’d like me to add, comments, suggestions or whatever then please leave them in the comment section below. Also if you liked this guide, please share it and follow me using the social buttons for more. There’s also lots more Guild Wars 2 articles here and more around the site.

Lastly if you’d like to support my guides, please consider a donation.

Thanks for reading and happy adventuring!