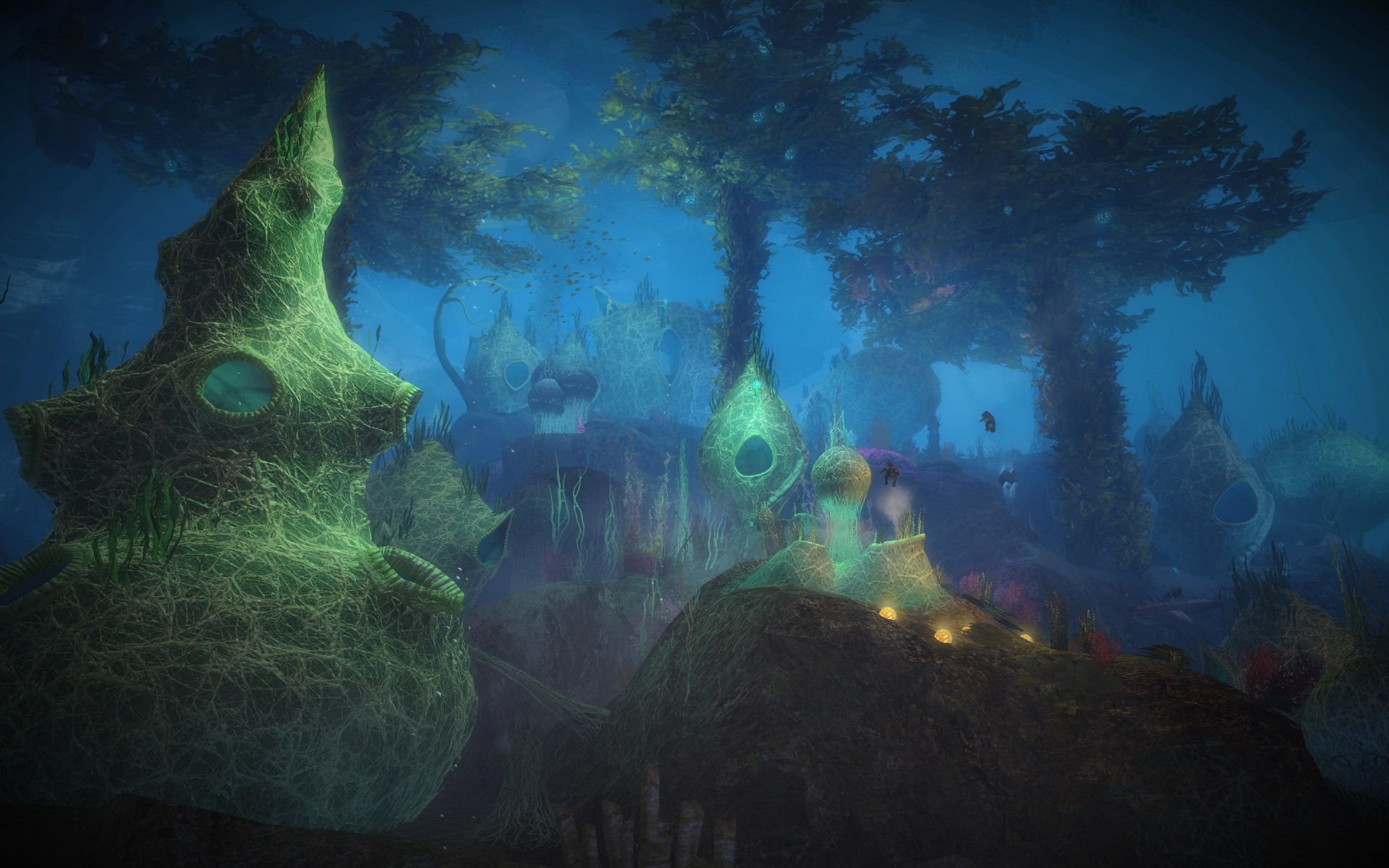 How would you handle an underwater combat revamp in Guild Wars 2? Perhaps it would play like Zone of the Enders, with flying mecha suits shooting lasers and missiles at each other, except that this is underwater, there are no mecha suits, but maybe there’s something like the lasers and missiles. Being underwater means an extra axis of freedom and not all players cope very well. Heck, I’ve seen plenty of players struggle with two axes of freedom… then again, all the gliding we’ve got now is fun, so why not underwater with underwater masteries? You could ride currents, have massive dodges, transform into a dolphin, erm, ride a dolphin?

Look, there are space games and flying games that handle this level of freedom very well and offer some great action combat too. Maybe now that Guild Wars 2 has its Action Camera and a crosshair it can offer a decent shooter experience underwater. Certain kinds of movement will likely need exaggerating a great deal to give the characters enough “whoosh”, but I’m certain this can be done through masteries. Perhaps we get to learn a style of water magic that enables incredible movement and interaction with environment effects, like currents or whirlpools. I’m certain there’s a lot of untapped design and fresh gameplay possibilities 3 years after release.

Obviously the big baddie would be Bubbles, the Deep Sea Dragon. Of course you realise that Bubbles isn’t his real name, right? Actually, I don’t think anyone knows what the Deep Sea Dragon’s name is, not even ArenaNet themselves. All I do know is that there’s a wealth of sea monsters to fight and a gigantic realm of adventure and story.

The Races of the Depths

So who would we be adventuring for and what likely enemies are we bound to face?

The Tethyos Houses and Largos Cities

The most exciting prospect of any underwater campaign is surely the idea of visiting a largos city! Quaggan cities are already familiar to Guild Wars 2 players and many settlements of quaggan can be seen underwater, from Caledon Forest in the west to Frostgorge Sound in the east and even within the great city of Lion’s Arch, bang in the middle of Kryta. Their architecture is really quite something and it gives the quaggan a strong identity. You know immediately when you see a quaggan building, that that’s precisely what it is. So, what on earth would largos architecture be like? They have such an utterly different culture from the peaceful quaggan that it’s hard to imagine one being open. Then again, what exactly is the place of the Tethyos Houses?

I imagine the Tethyos Houses of the largos represent only a small proportion of the general largos population, like a privilaged elite, monastic order, mafia group or other private body of people. Certainly they will have their own bastions, and given that the name implies a plural the Tethyos Houses are bound to be split into two to four or more named houses. Perhaps not every member of a house is a trained killer either, or perhaps they are. Being the secretive people that they are and being from the black depths of Tyria’s oceans, they must have had relations with another denizen of the deeps, the fallen god Abaddon. Were they friends or foes? I suspect the largos may still have a religious order associated with Abaddon and saw him as a key ally when he was active.

Indeed the largos must have had a relationship with Abaddon going back centuries, with an abrupt pause when Abaddon was sealed away in the Realm of Torment. I suspect that despite his imprisonment, Abaddon was still able to keep in touch with the largos through secret magic and that there would come a time when the largos would offer him refuge in the deep away from prying eyes on the surface.

A Fallen God: The Abaddon Connection

In the Guild Wars universe, Abaddon was the God of Secrets and the God of Water, especially the deep oceans. His chosen followers were known as the Margonite people, once human but now demon. Their forms were humanoid, men and women, but with six eyes and razor teeth. Black and purple were their colours, and in places their flesh had been entirely transformed into magic. The first of these creatures was Jadoth, whom Abaddon saved from the hideous Forgotten, but the most famous currently is Mallyx the Unyielding who can be called upon by the revenant class. Officially Abaddon died in the Realm of Torment around 250-260 years ago, his power taken by Kormir who ascended to godhood in his place. The trouble I’ve always had with the official version is that the God of Secrets can always have one more secret. Imagine that Abaddon is able to sever his god-power in the way a lizard does with its tail. A scenario can play out like this: the enemy, in this case Kormir and her hero allies, are dazzled by the raging storm of power that Abaddon’s defeat has left behind at the end of the Nightfall story. Abaddon’s ghost uses the distraction to to slip through the mists into his final refuge and familiar home, the watery depths of Tyria. Abaddon is quickly forgotten amid the scandal that follows, that being how Kormir got the credit for all the heroes’ hard work.

Ah, and so the sleight of hand goes unnoticed. It would seem to me that Abaddon is much like Palawa Joko in that he’s more or less impossible to kill. Rather it’s a case of out of sight out of mind, so if he’s at the bottom of the ocean then Tyria rests easy. Now after 250 years or so living in the depths his wounds are healed, and the scraps of what little power remains are consolidated. Taking stock of his strength, he might well consider himself a demi-god with millennia of knowledge and, by mortal standards, a fair bit of magic up his sleeve. Perhaps he would consider tapping the bloodstones to recover his full strength, or perhaps this is impossible. Regardless of this, he has a bigger problem. A dragon wants to eat him for lunch.

The Plight of Abaddon

Abaddon hiding in the depths is why the deep sea dragon hasn’t been near the surface: there’s this tasty ex-god who’s still got a fair bit of magic to gobble up, if only the dragon could get its maw on him. Of course, being an ex-God of Secrets still means being one slippery customer and the dragon’s going to have its work cut out. Enter the heroes to save the day.

I have to say, back in Guild Wars 1: Nightfall one of my favourite sections was adventuring around with the lich Palawa Joko after releasing him from magical imprisonment. Of course it was a titanic folly in the long run, but adventuring with an immortal lich was a hoot. Palawa Joko was known as the Scourge of Vabbi (a nation similar to Persia), and he had an undead army that was eventually defeated by a great hero named Turai Ossa. The trouble Turai had was that after defeating the lich, his body couldn’t be destroyed by anything at all. Not by sword, nor hammer nor fire, nor anything they could think of. So in the end Palawa Joko was buried under a gigantic stone head covered in magical seals and left for eternity, which turned out to be until released by some “heroes” who were trying to save the world from Abaddon. What irony then if heroes in Guild Wars 2 could adventure for a time with the fallen Abaddon, recounting the time of Nightfall!

Just in terms of epic lore bombs, Abaddon would be an amazing character to spend time with. Even more interesting in his fallen state, where his diminished level of power forces him to deal with heroes from the surface, just as Palawa Joko did when he first got back to his neglected city, the Bone Palace. Characters from the Durmand Priory and the Order of Whispers would be especially interested in Abaddon and for very different reasons. The Durmand Priory has a statue of Abaddon in their deep library archives, and I suspect a certain reverence for the old god. The Order of Whispers on the other hand was foremost in defeating Abaddon in the time of Nightfall centuries ago and might feel a certain level of unfinished business.

So, imagine Abaddon has a close relationship with the Tethyos Houses of the Largos and this relationship is the primary alliance, along with the Quaggans, against the Deep Sea Dragon. Somewhere in this picture are the Krait with their prophets and their dark obelisks. Whose side are they on other than their own? It’s hard to imagine any working relationship with krait but perhaps a few individuals might work with heroes from the surface. Anyway, the whole scenario is positively delicious.

Whether it’s the next dragon on our list or not, I’d love to hear your thoughts on the Deep Sea Dragon affectionately known as Bubbles, and the possible shape of an underwater campaign in the comment section below.

Get your Guild Wars 2 stuff !