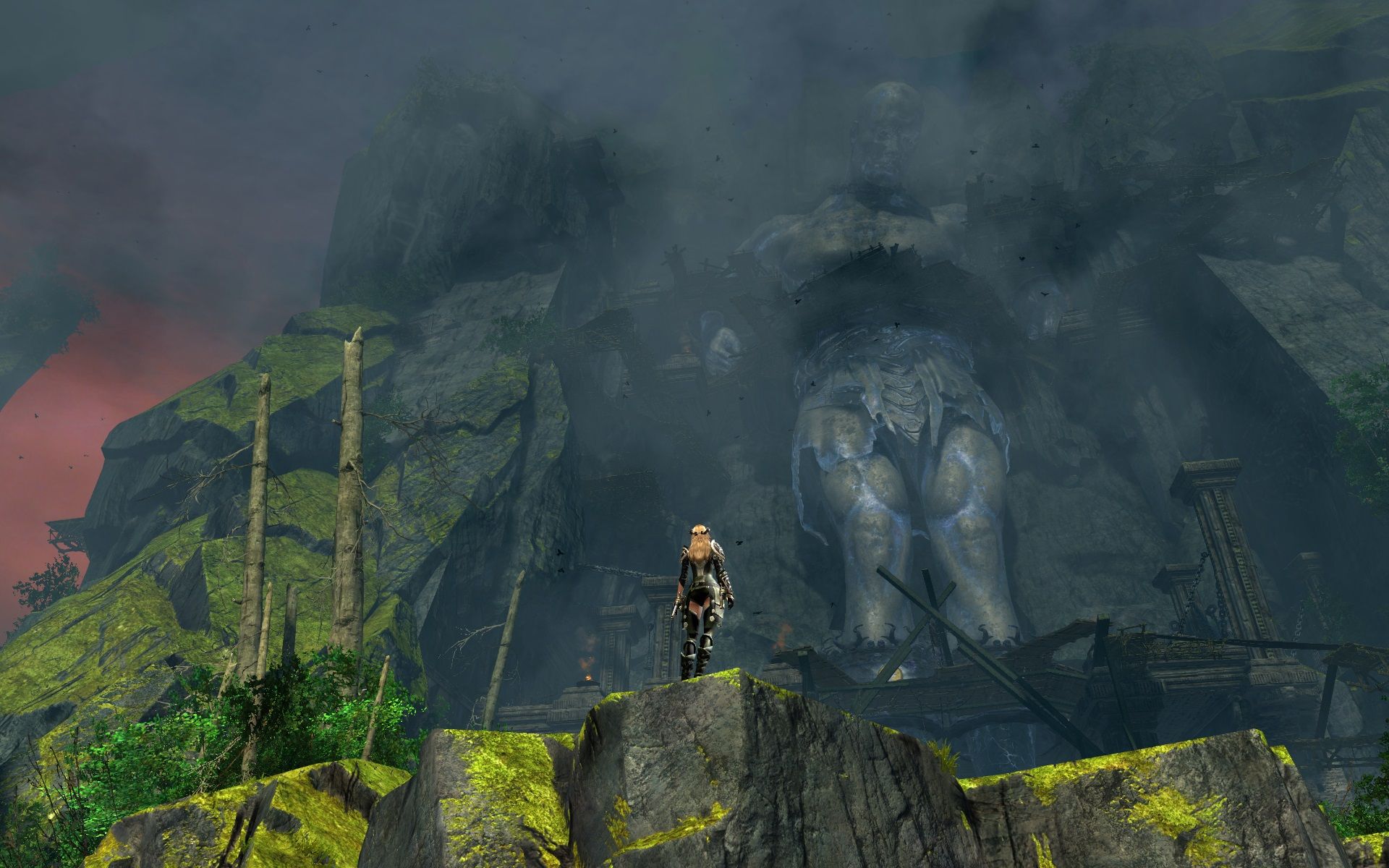 Come And Explore The Mists, For Science!

Anyone new to Guild Wars 2 needs to know a bit about Fractals of the Mists. Fractals are story fragments that players can explore to help a scientist called Dessa.

Dessa is an intrepid explorer of the Mists, which is the space between worlds. She and her team have identified pockets within the Mists that contain not whole worlds exactly, but a fragment of space and time that can be relived over and over again. By sending adventurers into these pockets to explore them, Dessa hopes to make exciting discoveries.

Now, each of these little pocket dimensions is called a Fractal. In our terms as players we’d call each one a level. Each one is inspired by some pivotal moment in Guild Wars history, which means that players can learn a lot about the Guild Wars universe by paying attention to what is happening in the Fractals. But wait a minute! Just how historically accurate are the Fractals?

While the Fractals are inspired by history and some are copies of historical events such as those based on “Flame and Frost”, the Living World Season 1 section that unfolded live on the game servers, other Fractals have large question marks over them. The identity of the colossus we free from cultists in the Cliffside fractal remains a mystery, as does the identity of the cultists. Who are they and what is their story?

Players have speculated that Fractals are a way for the Guild Wars storytellers to drop lore into the game that might be explored later as much as it is being used to record events. Be that as it may, what’s most important to us as players is the gameplay on offer and how much fun you could be having playing this content.

Fractals Have Evolved Since Their Release

Fractals of the Mists is a 5 player format where a band of players form a group and play through a level together, upon completion of which everyone gets rewards.

The current incarnation of this system it has to be said is far, far ahead of where Fractals was when it released. Since the 2016 Sping Update it’s possible to do single fractals of your choice, whereas originally you had to do three or four back-to-back, somewhat selected at random and it was a giant pain. They were admittedly meant to be a challenge above and beyond what you could do in a regular dungeon, but now players looking for that can do 10 player raids.

My experience of the original format was that it often took a long time, as in hours when starting out. You could lose all of your progress if you disconnected. A team with a disconnected player couldn’t replace them, meaning things got harder. Rewards were sparse. Basically, if you had 20-30 minutes to kill with some casual fun, as a casual player… you didn’t go to Fractals. Hardcore only.

I have not been a fan of Fractals for most of their existence, which is over 3 years. Having tried them again since the 2016 Spring Update however, I find them so painless that I’ve become a casual convert.

The current incarnation of Fractals of the Mists is fun, fast and rewarding, providing I stick to my favourite levels. I can try one of my less-favourite levels if I feel like it and there are 15 levels in total at the moment to choose from, which means Fractals has a lot to offer everyone. Also I should mention that there is a concept of “fractal rank”, which I put in inverted commas because the in-game term is “personal fractal level”. This is the maximum difficulty level you are allowed to play, and as you rank up so you can play the higher difficulties.

There are 100 difficulty levels, each one associated with one of the 15 fractal levels. So like, difficulty scale 16 is associated with the Snowblind fractal. If you don’t like a particular difficulty level you can actually leap-frog it by playing an even higher difficulty, which you do by helping a player who has access to that higher level difficulty. However, you will only advance one rank at a time so you won’t be able to skip 20 or 30 ranks or anything crazy like that.

The loot that you can find in Fractals is also tied to your “personal fractal level”, which gives you an incentive to rank up. These days you can get ascended equipment dropping at the higher levels, which is the equal highest tier of gear! Now, my personal fractal level at time of writing is 34 out of the possible 100. That’s not bad and I saw my first infused ascended ring drop recently, something for years which had been the stuff of fables. There are also daily rewards that are tied into the “daily system”, which I will touch on.

Many games have a daily system where quests are given out that can only be completed once, and just for that day. Next day there will be another quest or set of quests, and the big draw to these quests is larger or special types of rewards. Now, it used to be that there was a chance for a daily fractal, but fractal dailies have been spun off into an entire category of their own with lots of individual challenges to tackle. All fractal dailies give extra rewards and tiered dailies can even be tackled simultaneously. For example, completing a Tier 4 Snowblind daily will give rewards for Tier 1-3 Snowblind dailies as well. That means a big boost for climbing the difficulty scales!

There are a whopping 14 fractal dailies available every day now. Two of these dailies are specific difficulties, such as scale 17 and scale 37. Since I don’t remember what these are off by heart I might end up blindly joining a group… but it’s easy to back out before they start if it’s something truly horrible. The remaining 12 dailies are all organised into tiers. There are 4 difficulty tiers in fractals that correspond to levels 1-25 (Initiate Scales), 26-50 (Adept Scales), 51-75 (Expert Scales) and 76-100 (Master Scales) respectively.

If you complete a tiered fractal daily, you get credit for all the lower tiers as well. So if you complete a Daily Tier 2 Snowblind, you’ll get credit for the tier 1 as well and all the corresponding loot. Every day, 3 such fractals will have tiered dailies associated with them and finding a group to do dailies with is also a lot easier now.

The Looking For Group Tool

With plenty of incentives to actually do fractals now, the next challenge is finding a few extra players to play with. That’s where the Looking for Group tool comes in, which is integrated into the “Contacts and LFG” panel in-game. This thing is pretty advanced now and has categories for all sorts of content from various open world zones, to dungeons, to fractals, to personal story missions, and even for finding role-playing groups… I missed a few things but you get the picture. If you need a group, this is your best friend.

Fractals are also a lot more tolerant of disconnects and hot-joining. It used to be that your group had to assemble and survive their way through all the content they were going to do in one sitting. Brrr! No more however, as you can use the LFG tool to grab an extra teammate part way through a fractal if one member has to suddenly leave. Also if you disconnect, you won’t be automatically booted and can easily rejoin your party in the instance. Basically, the current system is robust and convenient.

Because of the daily system, there’s usually a bunch of players all looking to do their dailies and so waiting times are usually short. If you find yourself waiting too long to see a group appear in the tool, it’s easy enough to create an advert yourself and have people join on you instead.

One of the advantages I’ve found with the tier system is that players join with similarly experienced players, so you get new players with new players, casuals with casuals, regulars with regulars and addicts with addicts. I’ve also noticed that my current rank of 34 gives me access to the Initiate and Adept areas of the LFG tool but I can’t see the Expert or Master Scales, which I assume is to keep weaker players from inconveniencing the more advanced ones. It’s probably a good idea. It also means that new players probably won’t have elitists to deal with, because they’ll be playing at the higher tiers with similar players.

The Final Word On Fractals

I’m genuinely excited to finally like Fractals of the Mists after 3+ years of… not liking them. The staff at ArenaNet have worked long and hard to get fractals into really great shape and they’ve had to develop and polish lots of systems in the process. I’m currently in the Adept Scales, which is a good place for a casual fractal player like myself and I’m getting all the fun I want without feeling the pressure to move up to tier 3. It’s nice that there are higher difficulty tiers there if I want them though, and indeed ArenaNet have been talking about how the gameplay works at the higher difficulty tiers and how they can improve things even further.

If there is another system they need to iron out more it’s probably Agony, which isn’t something I talked about because it’s really of no concern any more to new players. Let’s just say it’s a bit messy to acquire a lot of agony resistance for surviving the higher difficulty scales. That aside, I heartily recommend trying Fractals of the Mists now whether you’re new, returning, or just avoided them for a long time because of bad early experiences like mine. Fractals in 2016 are fun – go enjoy them!

If you have any questions about Guild Wars 2, Fractals or comments about anything else that’s related I’d love to answer you in the section below, plus you can follow me and share this with your friends using the social buttons around here somewhere. Oh, there they are over there. You can also find out more about Guild Wars 2 in the menu and sidebars, which also have a link to the free version on the Guild Wars 2 site if you want to give it a spin for free.