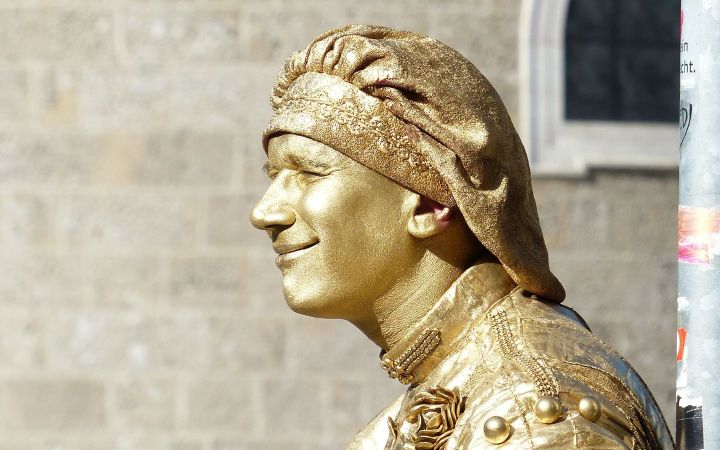 One of God’s great pranks was to create the atheists. Atheists make a mistake and they run with it.

Blind To The Obvious

I’ve debated with atheists for years, listening to their misconceptions. The ancient concept of God is quite simple: it is the name given to the cause of creation. It’s worth repeating, that God is the creator of creation by definition. Still, there are people who deny this definition “for reasons”.

I have been fascinated by this cognitive dissonance for years. There are some otherwise brilliant people in the world who I have read or listened to at length about atheism. In the end I concluded that they were idiots, and I mean this in the most harmless and playful way. They had made a mistake at the very beginning. Once this initial mistake was made, they ran with it and they did not stop for anything.

I decided to break this issue down for atheists and anyone else who might be interested. An atheist conflates something they don’t understand with something that doesn’t exist. This is not smart.

Two distinct questions have been merged together: “Does God exist?” and “Where and what is God more specifically?“.

The first question is an easy “yes/no” binary question that is trivial to answer.

The second question is mysterious and enigmatic. No complete answer is possible.

The Atheist stance proclaims that God does not exist because God cannot be explained. The lack of a satisfactory answer to the second question is being used (erroneously) to cast doubt on the highly satisfactory answer to the first question. This is not good logic. To challenge the atheist stance successfully, it is essential to distinguish these two questions and tackle them one at a time.

There’s also this red herring to address: religion. Religion is irrelevant. God needs no religion, nor any book. The idea that God is caused by belief is preposterous and should be discouraged at every turn.

That there are religions that choose to worship God and write texts about it, put words into its mouth and create fanciful mythologies is entirely irrelevant.

I have witnessed atheists debating the more imaginative believers and I would put forth this analogy of how their conversations go:

When a concept so nebulous is embodied in symbols, one must be sure to distinguish between the symbol and that which is symbolised. Yes, Uncle Sam is fictional. No, the United States of America is real. God is a similar case, with the added difficulty of grasping what it is more specifically, in physical and spiritual reality.

The difficulty with holding the image of God in the mind is a problem for atheists. “What does God look like?” is a reasonable question to ask, after all. I cannot put the answer properly into words, because words lack the power to communicate this. Anyone who has beheld God in their mind’s eye would likewise have this problem. It’s impossible to do it justice. God has a physical aspect and a mental/spiritual aspect. Put bluntly, it’s everything everywhere at all times, but then there’s this unfathomable mental/spiritual aspect to it as well that goes beyond comprehension.

I encountered a similar problem with words and their lack of power when asked to communicate the entirety of English culture in a forum post. I had no words then, either. It’s too vast and nebulous, something so far beyond what words are capable of. To understand English culture one has to live and breathe English culture for one’s entire life. Even then, it takes a lifetime to glance but a mere fraction.

My point is that sometimes we have to accept that as imperfect human beings we’re not going to comprehend everything. Naturally that never stops us from trying, and nor should it. The game of being imperfect is to see how close we can get to an impossible goal.

The Irreligious Road To God

I do have sympathy with atheists and the difficulty of understanding God. I myself flirted with agnosticism as an adolescent when I found myself disbelieving the traditional Christian teachings I was schooled in. I fell in love with science, especially physics, as a substitute.

It didn’t take long to discover the limitations of science however and, regarding the Christian religion, we’d been here before. The Enlightenment thinkers had gone through the same doubts and turned likewise to ancient texts. Following in their footsteps, I read many works such as Poemandres and Timeaus. I rather enjoyed Timaeus’ attempt at describing what we now know to be atoms and molecules in terms of geometry: the fashionable, cutting-edge science of the day.

Crucially, Timaeus put the necessity of God in plain terms that were undeniable. I still find it hard to believe that an entirely rational argument founded in sound reason for the existence of God hides in plain sight.

Another part of me cannot believe that the simple deductions of a 4th Century BC Greek philosopher are so difficult to grasp.

God is defined as the cause of creation. It exists because it needs to exist.

We need God because:

Creation is an effect. Therefore, it requires a cause. The cause was named God. It’s that simple.

The Name of God

The name “God” is arbitrary in English. The ancients could have called it Dave, but they didn’t. They could also have used a girl’s name, like Susan.

The choice of “God” is unfortunate in some ways, like the common conflation with gods-with-a-small-g such as Zeus or Odin. It’s since become common for some people to talk about God living in a realm similar to Olympus or Valhalla. This is unhelpful when it comes to discussing the nature of God, though it makes for a great story. Indeed, entire books have been written.

The Nature of God – The Atheist Mistake

So far, little has been said about the nature of God. The concept of the creator currently exists in a blank form, for which we only have a name. It is absolutely vital that a person can accept the idea of the creator without trying to put any additional attributes on it: no gender, no place, no nothing. Just get comfortable with the deduction: creation is an effect; there is a law of cause and effect; therefore, there is a creator, and we’re just going to call it God for no reason. The name is arbitrary.

If you have grasped this simplest of concepts of God, then congratulations: if you were an atheist, now you’re not. Now you can get into far more interesting questions, such as “Okay then, where and what is God more specifically? What is the nature of God? Does God want something, or not?” Or of course you could not bother, because you have better things to do with your time than to ponder abstract mysteries of the universe.

Anyone who acknowledges a creator of any kind is not an atheist. It might be the case that the penny hasn’t dropped for them, that they’re looking at the very thing they don’t believe in without realising, or that there is some other cognitive dissonance going on. The creator is God by definition. Some people just point-blank refuse the association, “for reasons”.

Now, as for answering the question “What is the nature of God?” here I must say that I could write a great deal, but I must discipline myself to focus this article on the question “Does God exist?” instead. I hope I have provided a satisfactory answer as to why God exists, regardless of whether you are religious, simply spiritual, or ambivalent to everything.

Whatever your path in life, I wish you well.