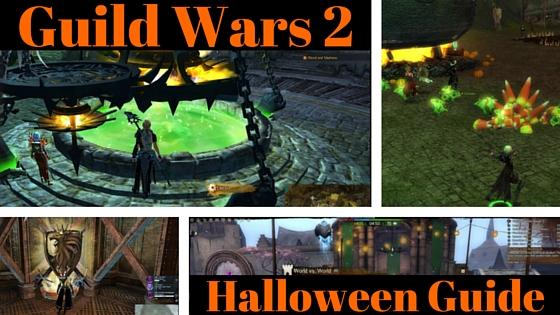 The Return of the King!

Halloween has been the most celebrated event in the Guild Wars franchise, pulling out all the stops for the most amazing event of the year. The host for our annual festivities is Mad King Thorn, notorious for bad jokes that always slay his audience and all the Halloween strangeness that follows him from the Mad Realm. In this space I’ll be giving you a Guild Wars 2 Halloween Guide to the main attractions that should be relevant to every year, not just this year.

Each and every year has advanced the story of Mad King Thorn with the exception of 2014, which was mostly repeated from 2013 for reasons. The story of the Mad King usually offers exclusive rewards for that year that become status symbols for those who were there. Year 1 weapon skins such as the Greatsaw Greatsword and Ghastly Grinning Shield are for the most part, very rare and valuable indeed. ArenaNet are very good at guiding players through the in-game Halloween story, so all you have to do to follow along is enjoy yourself in-game alongside everyone else. Players are always willing to help anyone who gets stuck if they ask a question in map chat.

There are lots of other events going on in the open world, typically tied to achievements for repeating them. Halloween achievements are only available for a limited time, so you want to give them a look in your Hero Panel to see if they have any special rewards that you want before the end of the event. Lots of exclusive goodies will be available from festival vendors in Lion’s Arch too, like outfits and minis, so be sure to check out what they have. Not to mention, check out the decorations and what the townsfolk are up to!

Amid the hustle and bustle of Lion’s Arch, the Mad King will come and play Mad King Says with his adoring subjects. This will mostly test your knowledge of emotes like /bow and /dance, and if you get them wrong then you will get to have a little laugh and carry on. At the end of the Mad King’s periodic appearance he will give out some goodies for taking part. If you ever want to know when the next appearance of the Mad King will be, be sure to ask in chat and you’ll get your information. Also, be sure to brush up on your emotes for extra rewards.

More about the Mad King

Every Halloween has some very, very special attractions. Some of these happen every year and I will talk about my favourites.

The Labyrinth is the principal farm area for sick loot and fun times with lots of other people in a giant spooky maze. Prepare yourself accordingly with loot boosters galore and a balanced set of equipment that you can survive in, because some of the critters in here are nasty.

During busy periods, there may well be a horde of players following a commander tag in a circuit. When things are quieter you can try exploring the place alone or with a small group, hitting events and dropping bosses as you go. In either case the main attractions are the general loot such as materials, gold and rare drops, and the volume of Trick or Treat bags that you can get. ToT bags always have exclusive rewards in as well as festive currencies and materials for buying rewards in Lion’s Arch. Some of the ToT bag exclusives are extremely rare indeed and you should feel very lucky for getting one, such as the mini Gwynefyrdd puppy ghost.

If you have a commander tag and rarely use it, the Mad King’s Labyrinth is the perfect chance to try. It’s a lot of fun to lead a hoard of players around a haunted maze and as long as the loot is flowing people will follow you anywhere.

More about the Labyrinth

Ah, the jumping puzzle of legend returns! When this debuted it was estimated by the creator that only a mere 5% of players might actually make it to the top. Challenge accepted?

I have to say that this is one of my favourite, nerve-shredding activities to do at Halloween and yes, I do make it to the top. People who make it to the top get a special gift from the reward chest the first time, and Trick or Treat bags afterwards. Obviously this event isn’t for everyone, but if you’re after some hard content then this is for you. Be sure to take screenshots and boast on the forums about your experience.

More about the Clock Tower

That covers my major highlights that occur every Halloween. The official Guild Wars 2 Halloween guide for each year will give a run-down of all of the events, including in 2015 the return of a special Mad King dungeon that last appeared in 2012. Be sure to look out for that because it’s already being associated with hot exclusives.

More about the Ascent to Madness dungeon

Have fun! Be sure to leave any comments for 2015 here.