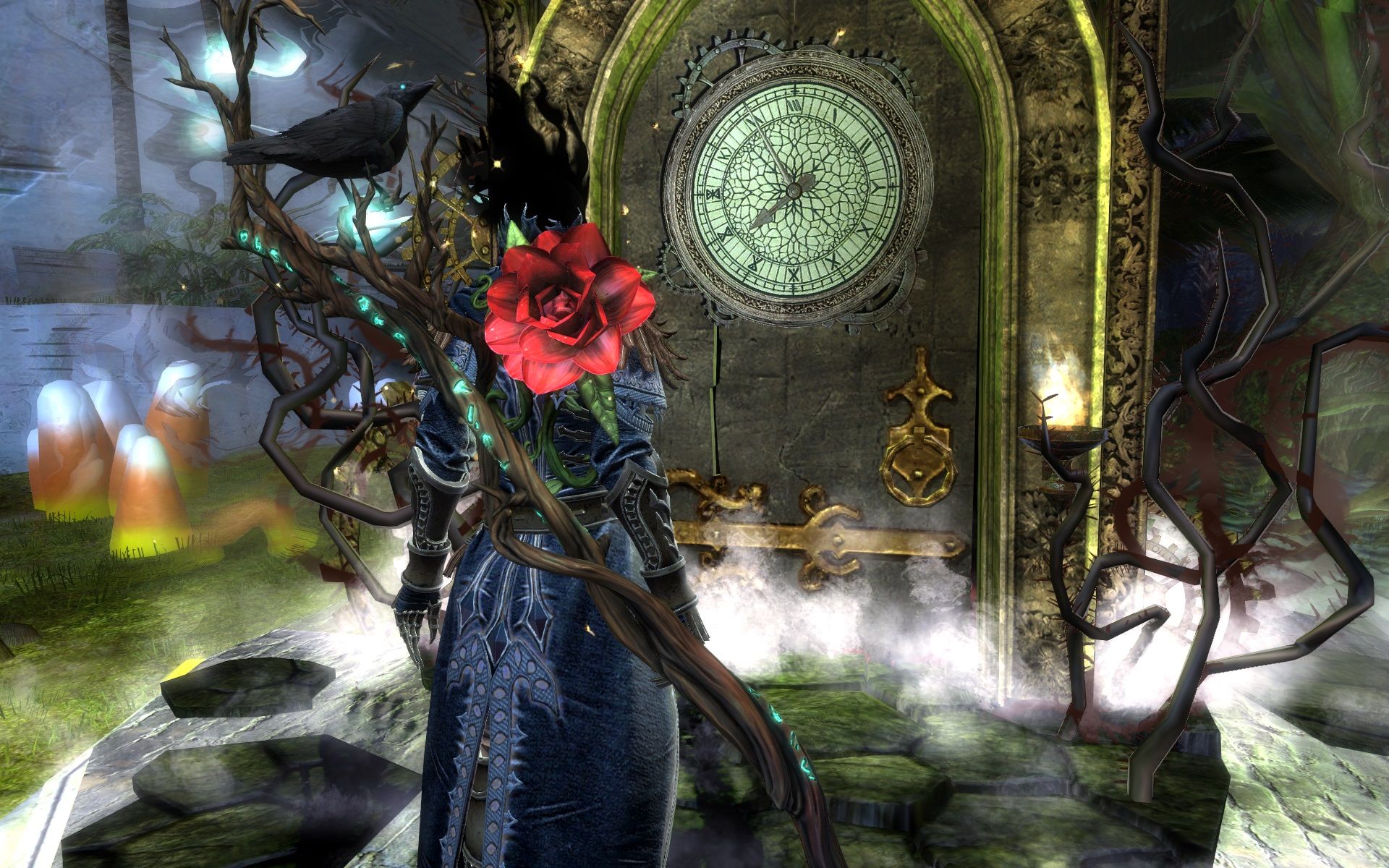 There’s a few days until Halloween as I write this but things are already underway once again in Tyria for the return of Mad King Thorn.

This year is mostly the same as the previous year, seeing the return of favourites such as the Mad King’s Labyrinth and the Clocktower. Also this year we have a few new additions to collect, although it was mainly the cats in hats and the miniatures that drew my eye.

If you want to see a technical guide with a breakdown, I’d go for the 2016 Dulfy Guide where it’s all listed.

This post marks about a year since I started blogging Guild Wars 2 and I still have last year’s Halloween 2015 guide right here. Oh my, how things have changed.

New Things To Do This Year

There are no big new activities to try out sadly, or is that a good thing?

New items have been added to Trick-or-Treat bags and a fresh list of items is up on the Candy Corn vendor. The fastest way of gathering bags and corn is still the Mad King’s Labyrinth for most people and if anything, it feels a lot easier to play since the power-creep from Heart of Thorns.

With the ease of throwing up a tag, whether it’s a mentor’s apple tag or a full blown commander tag it’s easy to find a zerg or create your own. I’ve also noticed a slew of Labyrinth maps on the Looking For Group tool in case you zone into a dead map and want to jump over to a populated one. It’s all really easy to get rolling.

Also if you’ve never been brave enough to tag up before and lead, the Labyrinth is the perfect low-stress environment to get your feet wet. It’s amazing how throwing up a tag in an empty map can turn you into a zerg-magnet. It starts with one or two, then half a dozen or so and before you know it a couple of people have put your map in LFG and you’re leading 30+ players on a rampaging loot-fest.

Seriously if you’ve never lead in the Labyrinth before, make this a “new thing to do this year”. It’s a blast. I’m pretty sure I started doing this last year or the year before – look just do it. Lead people around for a half hour, an hour, a couple of hours. Trampling the Labyrinthine Horror under your army’s feet alone will make it worth your time. Even the Lich is melting like I’ve never seen before. Lead, and Make Tyria Great Again!

So You’re Drowning In Candy Corn

However you get your mountains of candy corn, the candy corn vendor is asking for A LOT for all the items that are up there. There’s the return of last year’s miniatures including a sure way of getting Gwynefyrdd, but it’s hellishly expensive as you might imagine. In addition there’s some new miniatures and one of those, Oxideciomus the Shadow Raven, is in the order of 600g worth of corn! Gwynefyrdd is around 550g.

Something to help you along with all that corn gathering is a King Sized Candy Corn node for your home. This is a direct upgrade to the existing node if you have it, basically replacing it with a “rich” version that you can mine once per day. Also of course if you mine it with one of the special picks from Ember Bay you can get Unbound Magic out of it as well.

ArenaNet have gone on this odd mission to turn us all into crazy cat ladies in recent months, so I have noticed. What better cat to get on Halloween then the Feline Familiar, the cat-in-a-hat summon from the Witch’s Outfit toy. Yes, there is now a way to get a permanent version of this cat in your home… the catch is you need to own an Enchanted Broom (the toy from the outfit) or find someone who does. You can probably just ask around in Lion’s Arch.

First though, you’d better get the food that the cat wants at the ready so that you can tame it. The Feline Familiar like to eat frogs. Of course it does. Yummy, yummy frogs. Where are you going to get a delicious frog for your soon-to-be feline companion? Just south of Lion’s Arch is a heart vendor by a bunch of frog juicers (you might remember the one, just by the zone transition into the city). From this person you want to buy the masterwork version of “Frog in a Jar”. That’s your food. Now go feed it to the cat.

The Feline Familiar is summoned by the Enchanted Broom and once it’s in the world it will give a special action pop-up when you’re near it. It’s a telepathic cat apparently. Anyone can summon the cat and anyone can interact with it, so again if you don’t own a broom you can have someone else perform the summon so that you can feed the cat and add it to your home instance.

I noticed the cat-in-the-hat in your home likes to go over to the candy corn node to claw bits off and eat. Then it likes to roll on its back and paw at the air for a bit. It’s kinda cute.

There are returning items, such as the Executioner’s Outfit that I’ve heard recommended for the toy that comes with it. Evidently it gives a huge movement speed boost in PvE if you find that useful. Personally I was a lot more interested in this year’s new outfit, the Ghostly Outfit.

The Ghostly Outfit doesn’t come with a toy but it does come with some nice effects, like grasping shadow hands and eerie super saiyan hair that blows around on invisible wind. Perfect for necromancers. If you own Nevermore, it goes well with that too.

The other Halloween item out is a magic mirror that allows you to peer into the Mad Realm, even if that might be a bit disconcerting. The other item to mention is the Bloodstone Glider, but this one’s theme is more in line with the current Living World and isn’t as such a Halloween one.

Really that’s about it. With no new story progression for Mad King Thorn players are being left to make their own entertainment for the most part. There are a few new goodies to collect and some to buy with either cash or gold, but nothing to blow our socks off.

So it’s a quiet Halloween and I guess most people will be playing in the Labyrinth, farming Ascent to Madness or braving the Clocktower. There’s a fair bit to pass the time, anyway.