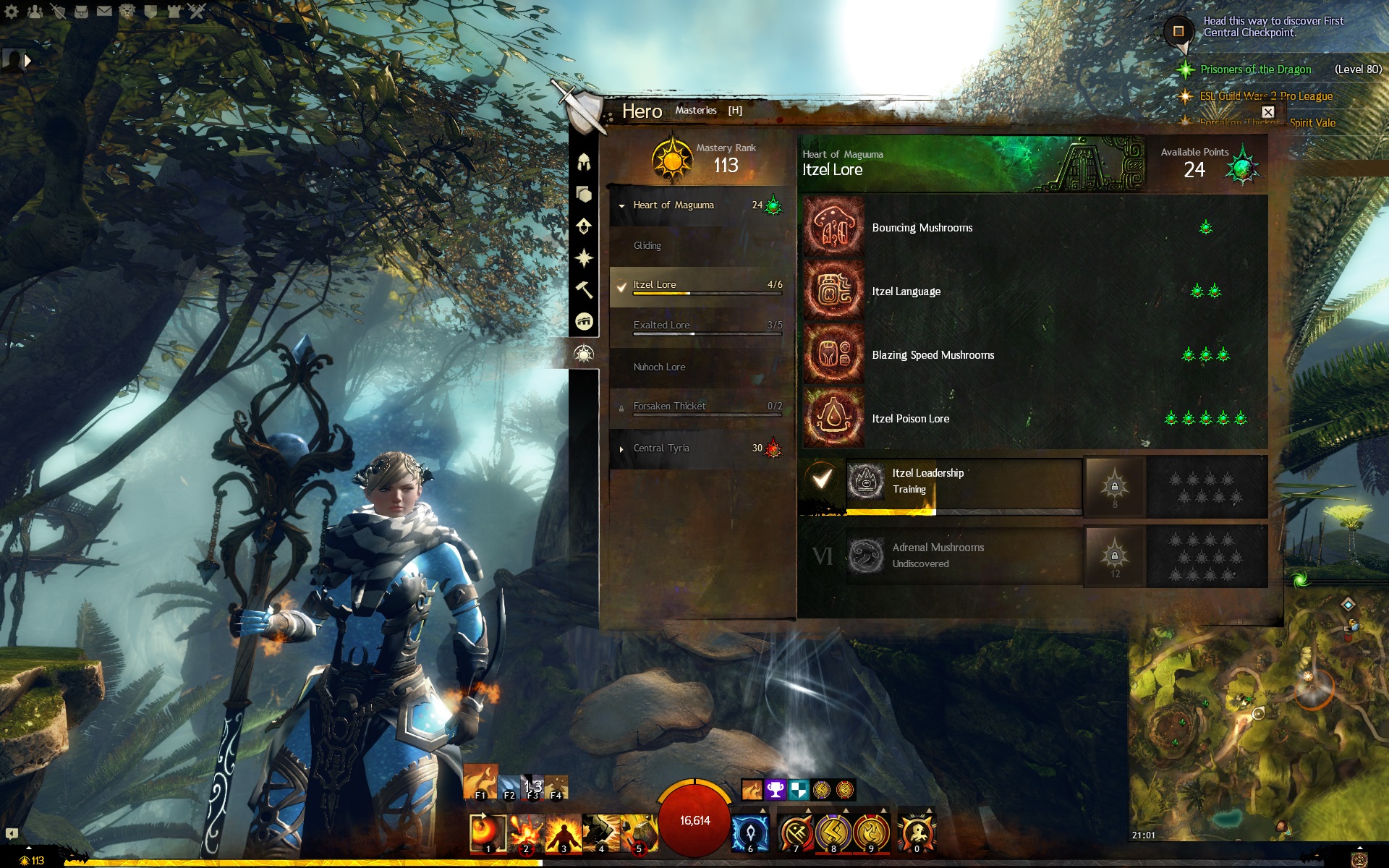 It’s now five weeks since the Heart of Thorns expansion for Guild Wars 2 released and my Masteries are getting close to completion. This is the perfect time to talk about the fun factor and how radically it changes gameplay whether you are brand-new to the game and know nothing, muddling along the road or already totally complete. Let’s be clear: masteries add a lot of fun once you’ve got them.

Masteries! Why they were added.

Anyway, it used to be that once you hit level 80 that experience you got from brave adventure was pretty much wasted. With the mastery system, you can once again put your experience gain to work and you even have some choices to make. The mastery panel presents you with a number of mastery tracks. You select one to be the active one and that’s where your experience will go: developing that mastery track and unlocking the abilities it offers.

Which Mastery Track is the best?

The “best” track is the one you’ll get most use out of and the one that’s also the most fun. Which one that is is clearly visible in hindsight and luckily for you, dear reader, I can tell you that the answer is the Gliding track. Every ability you get is useful for reaching more places, more safely, more quickly. Finishing the track awards you with an unparalleled level of freedom that you’ll be using in every Heart of Thorns zone and even in the story missions.

What about the other tracks? What’s “essential” to pick up?

Those abilities also add to your ability to get around to more places, more safely, more quickly as well and they’re quite early in each of the tracks. Once you’ve picked up the second ability in Gliding (Updraft Use), it’s well worth snatching up these other abilities before going back to Gliding to finish the rest of the track. ArenaNet’s designers have wisely put the most essential abilities early on in each Mastery Track so that players can get on and have fun as soon as possible.

Right! With the essentials out of the way all of your characters will be able to get to all but the trickiest of places and fight all but the nastiest of enemies. These next abilities will allow you to do even that:

These abilities are really quite advanced and by the time you get around to earning them you’ll have a good idea where you’ll be needing them. Every zone in Heart of Thorns is ripe with secrets to uncover right from the very first zone, Verdant Brink. Once you have some of these abilities you’ll be able to go back and explore every last nook and cranny and defeat every elusive creature that had foxed you before.

So the rest is just fluff?

Relative to the previously mentioned Heart of Thorns Mastery Abilities, yes. You’re quite unlikely to worry about anything beyond the ability to trade with the various factions for quite some time, so by the time you get around to unlocking something like Exalted Gathering you’ll be very experienced at Heart of Thorns. Personally I’ve been able to make steady progress through the mastery tracks purely through casual, regular playing. I’ll just log in, play a bit and make some progress and log out. Looking back the experience has been quite fulfilling and I wonder what I’ll be able to do with the final few mastery abilities I have left to get.

The final word for new players is to take things at your own pace and in time you’ll get everything naturally. I have seen players blitz the masteries and sure, you can do that if that’s your thing but remember that you can only level up your masteries once and then they’re done. So, if you’re a more casual player then just sit back and enjoy the ride.

Just released: the gliding you’ve read about in Heart of Thorns has arrived in the classic maps of Guild Wars 2, as announced by the developer ArenaNet earlier this month. This is great news! Gliding was already so much fun that I can’t wait to see what people get up to and to try it out for myself.

If you have any questions, comments or experiences to share, whether you play Guild Wars 2 or not, please leave a comment. Also if you would like to leave me a small tip for my guides, please check the links. Thanks and happy gaming!