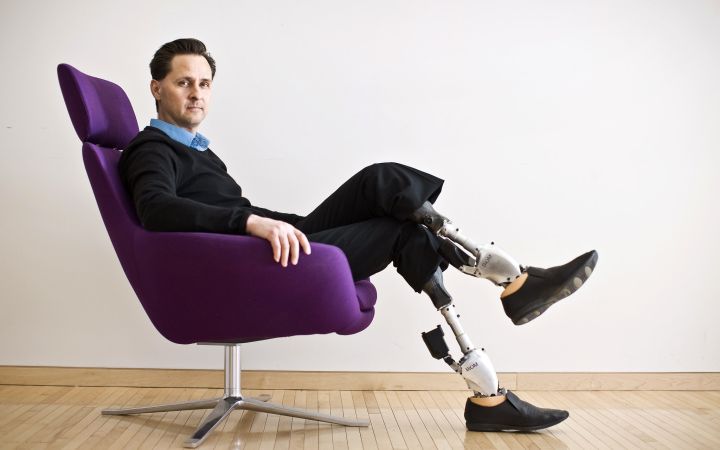 Hugh Herr is a professor of biophysics who lost his legs at the age of 17 to frostbite, which was to mark the start of his path into the development of bionic prosthetics at MIT. Today, Hugh Herr wears remarkably advanced prosthetic legs that mimic true human movement. These are no peg legs! His work transforms lives and it’s worth shouting about.

It’s astonishing to think that decades ago, cyborgs were dreamt up as man-and-machine hybrids that for whatever reason substituted human parts with machine parts. Often this was down to injury, such as the loss of a limb. One only needs to remember Star Wars: The Empire Strikes Back for the scenes in which Luke Skywalker loses a hand in a light sabre duel only to have his hand replaced with a bionic one a while later. You can compare the real life technology Professor Herr is wearing to Luke’s fictional hand and see just how close we’re getting.

Fiction has gone much further than the idea of replacing limbs, all the way to the idea of a near complete brain and body replacement as told in Ghost in the Shell (by which I mean the 1995 animated film). We’re not at the technological level of Ghost in the Shell just yet but you’d be amazed how far along we actually are in the realm of limbs. The most poignant use for this technology is for our brave war veterans and people who’ve suffered accidents.  Regardless of how limb loss occurred, I want to push the awareness of this technology’s existence so that people who need it can benefit from it.

Where Can You Get The Tech?

If you need this technology yourself or you know someone who can benefit from it, you’ll want to get in touch with BionX Medical Technologies. Their site is full of information and there’s a contact form for you to get in touch with them about your particular needs. You can also find them on Twitter, here.

You can read also about the research that Professor Herr’s Biomechatronics Group does at MIT here, just be aware that this is the research team and not a sales team. If you’re a professional looking to get involved, they might be interested in hearing from you.

Professor Herr gave an inspirational 20 minute TED Talk in 2014 explaining the technology and how it came to be, which is well worth checking out if this is of any interest to you. At the end of his talk he is joined by special guest Adrianne Haslet-Davis, a dancer who lost part of her left leg in the 2013 Boston Marathon bombing. With one of Herr’s bionic legs she is now able to dance again on the stage.

Professor Herr and BionX specialise in the lower limbs but not the upper limbs. For those, let’s touch on another company I came across in my research.

If you need the Luke Skywalker treatment, I have you covered. Touch Bionics specialises in arms, hands and artificial skin.

I forget precisely how I heard of this company but the synergy between BionX and Touch Bionics is obvious. One does legs, the other arms. Again the technology is amazing and I’ll just let this person’s story speak for me.

It’s quite incredible what technology is available to replace a limb nowadays. If this technology is of interest to you or someone you know, you should visit the Touch Bionics website. You can also find them on . (Now gone.)

That’s all for today and if you have anything to say in response please leave a comment below. If you know someone who’d love to read about this, don’t forget to share the article with the social buttons and you can also follow my updates with some of the other social buttons.

Thanks for reading and have an inspired day!