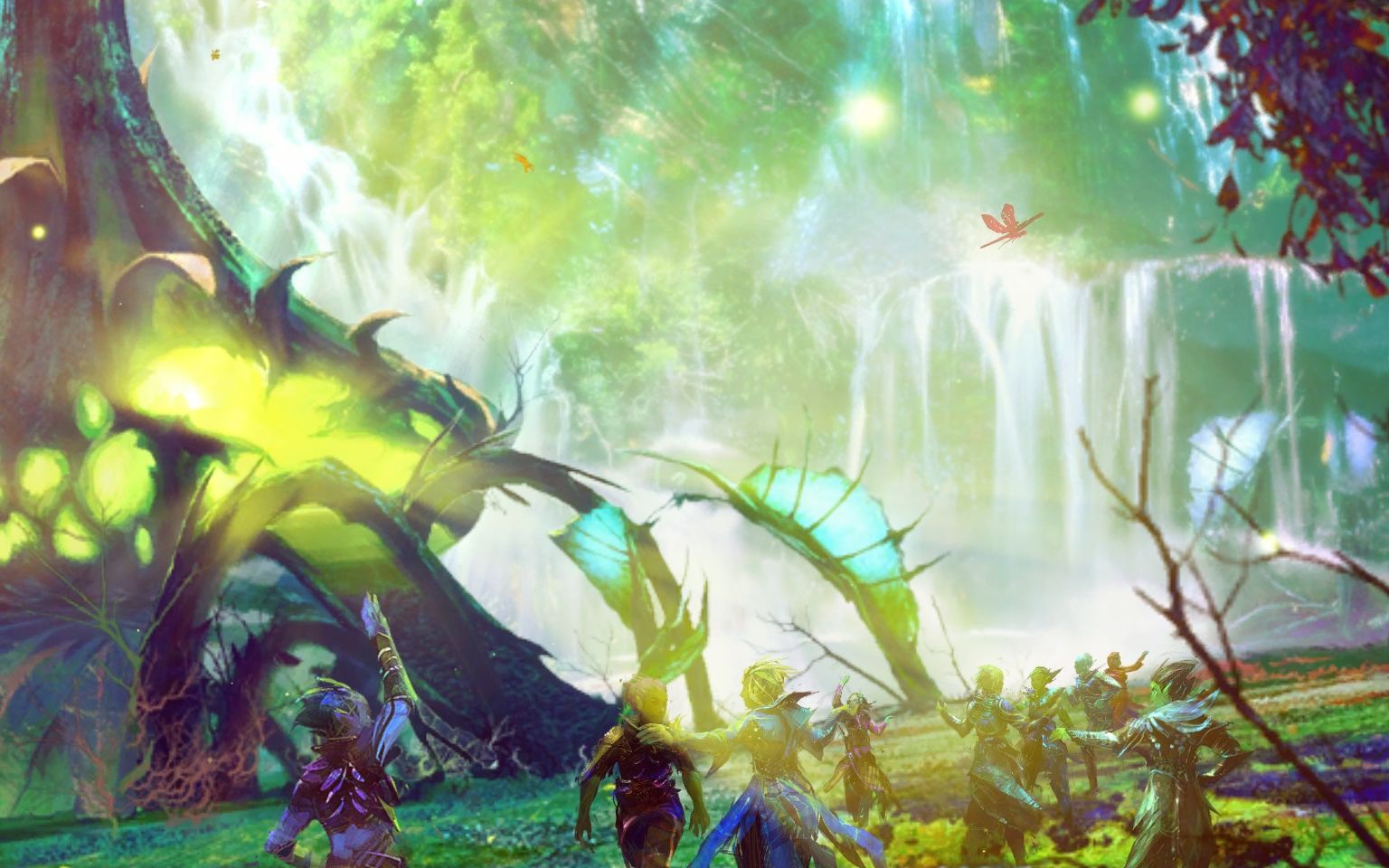 Pull up a chair and sit yourselves down…

Last night I finished the “personal story” for Guild Wars 2: Heart of Thorns, which is played out in private instances separate from the open world. What did I think? Ah! It’s a mixed bag. Of the five playable races, two of them are handled really really well (sylvari and asura) and the rest… might need a bucket to cry in.

Long before Heart of Thorns was released, all the fans knew that the sylvari were central to the story. A bombshell revealed that Tyria’s newest race had been created by the elder dragon Mordremoth an aeon ago to serve it as slaves when it awoke from its slumber. By an accident decades ago, a seed had been discovered and planted that sprouted into the Pale Tree, the source of the sylvari known to the other races. By a second accident the sylvari born of the Pale Tree had been guided to the side of good and virtue while their master slumbered, and in its absence they had allied with the races of Tyria to slay Zhaitan, a rival elder dragon.

With the awakening of their master Mordremoth, many sylvari were turned into slaves. The dragon has a powerful mental connection to all sylvari and only the strongest-willed and most determined characters were able to resist. Naturally this includes all of the player characters, because who wants to log in to a message along the lines of “Sorry, this character belongs to Mordremoth now!”? Awkward. There is the bonus however of getting telepathic broadcasts from Mordremoth that only sylvari can understand, which really adds flavour. Non-sylvari will only hear some gibberish instead: one can only assume it’s a villainous grocery list.

There’s a bunch of notable non-player sylvari characters who remain loyal to Tyria throughout, long-established and well written. The likes of Canach, Caithe and Faolain are complex characters who live in defiance of the dragon. Even Trahearne who is disliked by many fans, has a new light cast on him by Canach at the very end. Of all of them, only Trahearne is a clear-cut good guy. Faolain remains an outright villain but one in defiance of Mordremoth, selfish and twisted to the core. Canach and Caithe are both walking the line, stepping over it from time to time, defined if anything by strong will and independence. I’d give the story an overall 9/10 for how it handles sylvari, and they’re my second-favourite race after the norn.

Let’s go from that highlight to the lows. The way the story deals with the norn Eir and her son Braham struck me as terribly out of character for Eir and the nature of norn. I was fine with the end result of what happened to Eir, just not at all with how it happened. How her son Braham dealt with it was also for me, terribly out of character for a norn. Let’s be clear, the norn are stoic, valorous, viking half-giants who laugh at danger and take loss in their stride. The whole Eir/Braham thread was a pit of weakness. The tones needed to be a lot more stoic, the pragmatism immediate, the loss not taken personally, the legend eulogised without a second thought. It should have been the stuff of heroes because this is what norn exist for and why they’re my favourite race. It’s just a 3/10 for the norn. On the glad side, Beigarth is there in the open world and he’s still a cool guy. I met his daughter Vanhe in Dragon’s Stand (didn’t even know he had one!) and that was cool too.

I also thought the charr had things rough if I’m honest. Rytlock is a badass as always, but his story was constantly avoided. Rox would pester him annoyingly with nothing to show for it either, which was slightly odd. Rytlock returned from the Mists (underworld) with a mental link to the deceased dragon, Glint, whose powers he can channel. Given that Glint is a central character to the story, you’d be forgiven for thinking that this was a really big deal. It doesn’t get a mention. Not a sausage. Both Rytlock and Rox both remain under-explored characters in the Heart of Thorns story and a thorough introduction of the Herald class though Rylock was likewise conspicuous by its absence. I can only hope that there will be follow-up story to tie up loose ends because there is very fertile ground here for something epic. For what there was for the charr though, I’d give the story 4/10. At least it’s not what happened to Eir or Braham’s mop of hair.

Stay with me until the asura because I’m going to say nice things. Let’s get the humans out of the way as fast as possible because they are largely in the same camp as the charr. The main humans to mention are Logan, Kasmeer and Jory, the first being of the legendary Destiny’s Edge guild, the second being an enigmatic mesmer and the last a grieving necromancer. Logan is the classic human hero: shining armour, fantastic hair, yadda yadda. He spends the whole story unconscious as far as I can tell and when I finally freed him from imprisonment he was still unconscious. Heroically unconscious! I don’t know, but for me he didn’t need to do anything else to play a perfect part in what wasn’t his story anyway. It was perfect.

The story of Kasmeer and Jory however didn’t go anywhere and I was really hoping it would. Jory was clearly becoming a Reaper (the Necromancer’s specialisation for Heart of Thorns) but there was just no character development there. At one point I could have sworn I saw Kasmeer perform chronomancy (Chronomancer being the Mesmer’s class specialisation), but again there was no development. Much like with the charr there are plenty of loose ends for the writers to follow up on, but for the story there was it’s a 5/10 for the humans.

At last I get onto my promise to say good things about the asura, my most loathed race. They are openly evil yet brilliant, quite without human morality. They are obsessed with progress at almost any cost. They are also rather tiny like gnomes, with big floppy ears and the face of a piranha. Anyway, they also happen to have the best story hands down after the sylvari! An easy 9/10 for the asura.

The first two asura to mention are Zojja and her ward, Taimi. Zojja has pretty much the same fate as Logan near enough, playing hostage to Mordremoth. Taimi has a major role in Rata Novus, the asuran city founded by Zinn, himself long-dead now from old age. Zinn’s legacy remains in Rata Novus and it has a rich and engaging story, much of it told through Taimi as you explore the city with her and her golem Scrappy. Taimi is brilliant, sarcastic, condescending and exuberant as she always is and plays her part effortlessly. The remains of Rata Novus in the open world are an essential compliment to Zinn’s background and what he does after he is banished in events that unfolded in Guild Wars 1.

So in the end…

Rata Novus single-handedly makes the story for the asura. It’s a city with a pure asuran story behind it that happens to be strong, and perhaps the lack of a strong thread for the other races is why the story falls flat for them. The whole expansion takes place in the Maguuma region of Tyria most closely connected to the sylvari and asura. It makes some sense that ArenaNet’s writers put most of their efforts here, but it really is a shame for the other races that there weren’t strong threads for them to latch onto. Outside of the playable races, there are allies and enemies that have more than enough detail put into them to satisfy.

The gameplay of the personal story can’t match that of the open world, either. They’re just worlds apart. Really, I can’t praise the open world experience enough, the designs of the zones and the meta-events and all the little touches and details everywhere. Top quality everywhere. The personal story is not that. It has its bits here and there that are fantastic and immersive and other bits that are just horrible and you wish them away. I’d say finishing the personal story is one for the harder-core, let’s say the casually hardcore player. I wouldn’t recommend it for the casual player, but instead recommend to them to play the open world Dragon’s Stand meta-event that culminates in the slaying of Mordremoth by a big coalition of players in dramatic, open world content. Really it’s the better ending of the game.

Have any thoughts about this article? Regardless of whether you’ve played anything of Guild Wars, please share your comments below!

8 responses to “Mordremoth’s Bane: The Heart of Thorns Story”