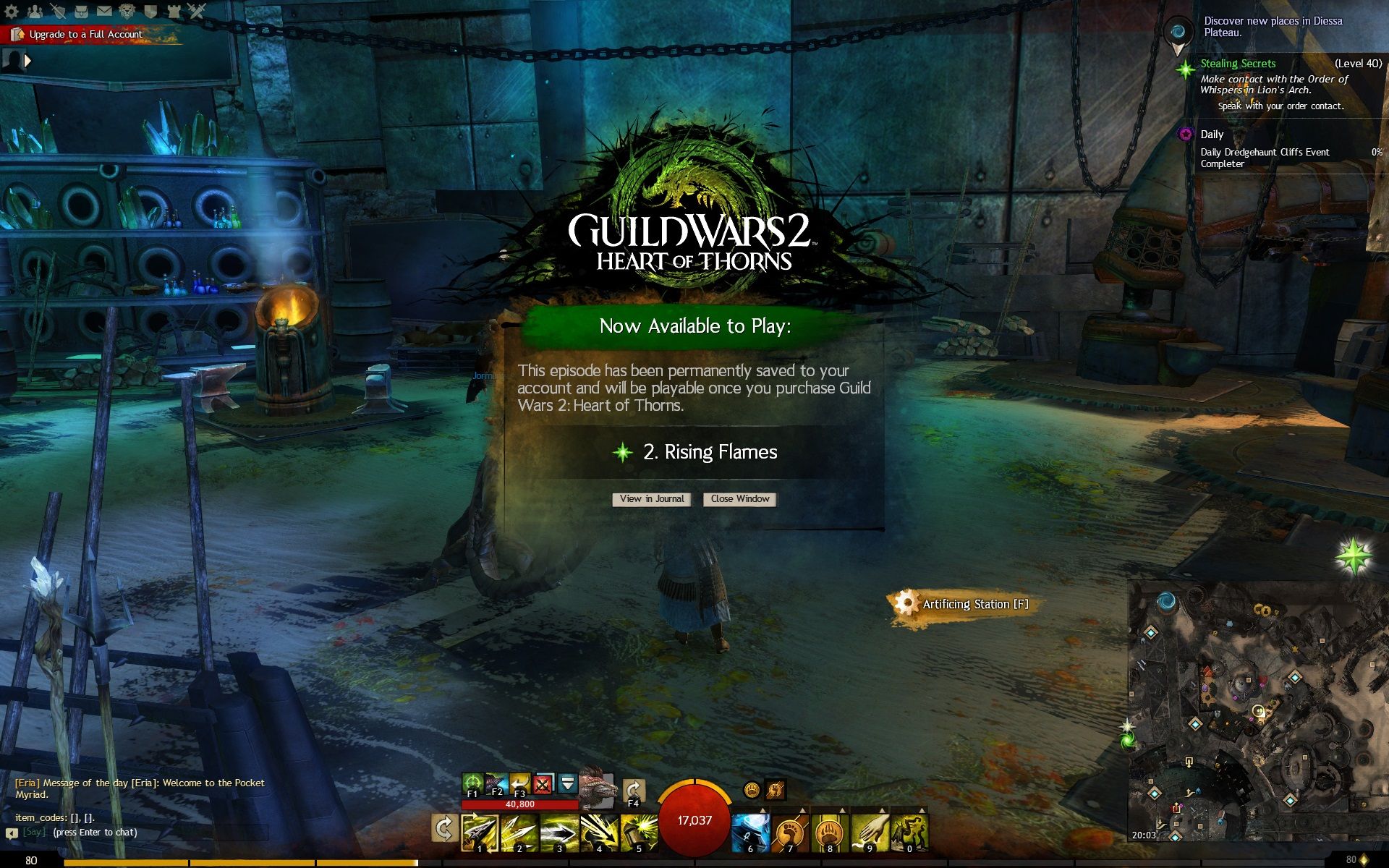 Later today, the next release for Guild Wars 2 called “Rising Flames” is due for release for owners of the Heart of Thorns expansion. Plenty of players are still on free-to-play accounts however and will miss out, so I wondered what was going on for the free crowd.

It’s been close to 6 months since I logged my vanilla free-to-play account in and I honestly had no idea what I’d missed. I constantly come across players who’ve been away for 1-2 years to find a completely different game at their fingertips and this is as close to that experience as I’m going to get.

The Most Obvious Things I Noticed

For a start I only had 9g on my free-to-play account. I think some people might play dungeons and Fractals and have a lot more gold than that but I only mess around in open world content and don’t come by much hard cash. So, it was a big surprise to collect 2g in cash for completing my daily! That doesn’t seem like much on my main account but it was a really big deal on my free-to-play one.

The next thing I noticed was the big loss of convenience, but some of that is due to only having a single character. I play a sylvari ranger. On my main account I have a full suite of crafters to process any materials that I gather before selling things on the Trading Post, much larger storage capacity in my vault and access to 4 crafting disciplines per character instead of only 2. I saw that I had jewel crafting and leather working at master level, which left me unable to process wood and certain metals for the market.

Well, I had a second character slot so I could easily level up an artificer to remedy that if I really wanted. The Trading Post prices for leather and cloth have really blown up so the cost of crafting leather armour is pretty nuts compared to what it used to be. Quite a few pieces of my armour were only “rare” quality which is behind the standard “exotic” quality gear I’m expected to own for end-game content. I could force myself through some dungeons or World vs World to earn armour there instead of crafting it, or there’s the option of grinding karma for exotic armour from the temples in Orr… but in the end I thought I was doing okay in what I had.

My weapons were exotic and tricked out with nice sigils, the major air and minor air combo, both of which are pretty common salvage fodder. They have the unusual property of working together despite being the same class (i.e., air sigils), something only a few sigils do. Mostly, you can’t use sigils of the same class in the same weapon and have them both function. I know for certain that you can combo any tier of air sigil together, or fire sigil together, and have both trigger on their own cooldown. Pretty neat thing to know if you’re stuck with few options.

Best of all, both of those lesser air sigils hit just as hard as their superior counterpart.

My trinkets (necklace, rings etc.) were all exotic, crafted personally. I’d always recommend jewel crafting as the number #1 crafting discipline for any free-to-play player because full exotic trinkets are an amazing boost and it’s not a hard discipline either. If you have your weapons and trinkets in full exotic then it doesn’t really matter if your armour is only rare, you’re good to go. Luckily I had upgraded my body armour in World vs World, so it was just the other 5 pieces that were rare. I suppose if I took my free-to-play account a lot more seriously then I’d get myself back into World vs World to finish off that exotic set.

If you get stuck for armour runes then a classic option is to simply slot jewels. Because I have lots of rare pieces I slotted them with emeralds, which increases armour as well as power and precision. The specific stat combo is known as “Captain’s”, a close relative of both “Assassin’s” and “Knight’s”. It’s quite aggressive but it has that nice little defensive “bump” since my armour is lower quality than I’d like. The exotic armour pieces have higher natural defense and so I can go with opals, which are “Assassin’s” stats, or power, precision (critical chance) and ferocity (critical damage) for pure extra damage.

Jewels are a nice way of tweaking your character’s stats for very little money so it’s a great trick to know.

Riiight, that. So the majority of the new content that has gone into Guild Wars 2 recently has been for Heart of Thorns owners, well, at least on the PvE front. With the Rising Flames release there’ll be some new PvP and WvW goodies to check out, and I suspect that’s where the best end-game is going to be for free players. There are however a bunch of things in the regular PvE zones tied in with what is being called “Current Events” in the achievements list. That’s the achievements list in your Hero panel by the way. It’s buried in there somewhere.

The “Current Events” er… events… actually started a few months ago with Bandit Bounties. A Shining Blade agent standing outside the palace in Divinity’s Reach, the human capital, is issuing bounties on bandit leaders suspected of working for the White Mantle, ancient foes of the Shining Blade and the current Krytan queen. You can start one of these bounties by first collecting some intercepted orders from slain bandits. You can only get one set of orders per day, but you can hand a bunch of them in together if you want to do a series of bounties back-to-back.

The bandit leaders you have to kill are all champions with unique fighting styles. Some of these are easier than others, especially for ranged characters. Should you ever happen to acquire a “bandit death mark”, or rather, should ANY player at one of these events be holding one then an extremely deadly bonus event can trigger. Should I spoil it? No, if you don’t know I’ll let you find out for yourself. It’s more fun that way.

Still, you won’t spend that long in-game doing bounties. You can get some achievements for doing them but not much else, so other than the fun of the novelty there’s no real point. The other things that are going on are best described as “ley line events” and “anomalies”. The ley line events are a bit weak, let’s be honest. I was joking with a few other players in-game that the game should be renamed “Wait Wars 2” or “Guild Wait 2” because you will be doing A LOT of waiting around for these events if you want to complete the achievements, which is time you could be spending having fun doing something else, like playing another game.

Rather than explaining again what needs to be done for these events I will point you towards Dulfy’s guide for them, and be warned, you need to be really keen to do them because of the waiting. They are quite good fun once they fire up though.

While I am on the subject of Dulfy guides, I should do a quick round-up for free-to-play players on the relevant ones because a lot of this information isn’t given out in-game. ArenaNet have been very poor with information about these events because, many suspect, they only exist for keeners anyway. Dulfy has been the best source for what on Earth ArenaNet have been putting in the game since there’s nothing but cryptic clues in the official release notes. So, without further ado you should know about: Ley Line Research, Seis Burntheart & Primordus, Bloodstone Fallout, Anomalies, Bandits and CATS!!

Some of the new events, particularly the legendary anomaly bosses and bloodstone creatures, might just show up randomly while you do other things. That’s how I discovered the anomalies were even a thing, and I’m supposed to be paying attention. Oops. The legendary anomalies are big bosses that show up in a few of the core Tyria zones on a 6-hour rotation, which is why they’re easy to miss. If you want to know when they are going to appear, or when a bloodstone creature is due to appear, there is a new timer site better than any other that I’ve seen called GW2Timer.com. You can even set a voice alarm that will give you reminders ahead of time that an event is coming up. It’s really neat and you don’t need to sign up or anything.

The other neat little thing is the cat quest that I linked the Dulfy guide for a bit further up. Honestly, just do it. You know you always wanted to have a character be a crazy cat lady and this is your big chance.

Overall, Worth Coming Back?

Well, probably for a few days if you’ve been away. This game does change a lot in small ways over time so there might be more than I’ve written. The great thing is, it’s easy to put this game down and pick it up again for a bit without spending money. So take a look if you’re curious or nostalgic, otherwise perhaps wait until the next expansion to come out at which point, presumably, Heart of Thorns itself will go free-to-play. Until next time,

PPS: As of mid Nov ’16 I’m trying Disqus Conditional Load on the site so please try it out! Guest posting is also enabled.